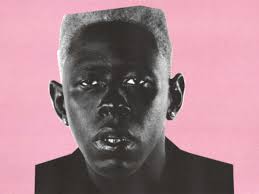 From storytelling about camp, to blooming from self-discovery, Tyler, The Creator has now begun a new chapter of his discography which is filled with emotions and heartbreak and introduces us to Igor, a character who is based on his love life.

Tyler, The Creator has shown us multiple alter-egos throughout his career demonstrating his creativity with different chapters and characters throughout his life. He talks about many different characters and how they affect his daily life, but in his most recent album “IGOR” he finally opens up about a new chapter of his life, his love life.

The album is split up into two parts, the first part contains the first half of songs on the album which are, Igors Theme, Earthquake, I Think, Exactly What You Run From, Running Out Of time, New Magic Wand, and A Boy is A Gun. This half talks about how Tyler is riding around and chasing a heart interest in a boy, who decides to shake him up and put him through heartbreak because he just doesn’t feel the same way. Tyler struggles to get the boy to like him, but to also forget about him. We slowly see how Tyler begins to open his eyes and realize that this boy is not meant for him and is just wasting too much of his time because of how differently they feel about each other.

The second part contains the final songs on the album which include Puppet, What’s Good, Gone, Gone/Thank you, I Don’t Love You Anymore, and Are We Still Friends. In the finale we see Tyler realizing that no matter how much he wallows, hurts, and rages, he will soon have to come to his senses and move on to just being friends. Tyler decides to move on and

finally admit that they are only friends because he couldn’t live with the fact that the boy did not romantically feel the same way he did.